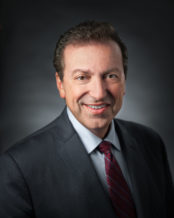 Robert Zawideh’s client was the youngest child of four children, (three sons and a daughter) whose father passed away in the summer of 2013.  Long before his passing, the father provided seed money to the three older children to start a real estate development company that became extremely lucrative for them.  Mr. Zawideh’s client did not share in that success, however, and his father decided to make up for that, years before his passing, by making his youngest son a joint owner on four bank accounts totaling approximately $2.1 million dollars.

The three sons were also equal shareholders in a trucking company.  During his lifetime, the father, through his trust, extended loans to the company which was evidenced by a secured promissory note, a note for which he refused payments.  One month before his death, the father amended his trust in two ways.  First, he confirmed his intention that four bank accounts were jointly owned with his youngest son, and that he was to be treated as a surviving owner of the four accounts on the father’s death.  Second, he wanted his wife to be able to demand payments on the secured promissory notes during her lifetime, should she survive him, and on her passing, the note would be forgiven.

After the father’s passing, the daughter, using a Durable Power of Attorney filed suit on behalf of her mother against Mr. Zawideh’s client, another son, and their company, seeking recovery of over $4.85 million. Specifically, the daughter claimed that the promissory note was worth $2.45 million and sought to accelerate the entire indebtedness.  She also alleged that Mr. Zawideh’s client was required to turn over to the estate $1.5 million remaining in the joint accounts another $600,000 spent from the accounts loan that wrongly described as a “loan”. The daughter also claimed that another brother was required to repay $300,000 as on another loan.

After the daughter filed suit, Mr. Zawideh’s client and his company went to court to require the daughter to accept $14,000 a month, which would be used to pay for their mother’s needs, which the Company timely paid every month for the rest of the mother’s life.

Following hotly contested litigation in the circuit court, probate court and Court of Appeals, and on the eve of trial, the parties reached a settlement, the ultimate cash payment amounted to approximately $0.15 on the dollar relative to the original claims asserted by the daughter.  Specifically, while the settlement agreement provides for a settlement amount of $1,800,000.00, the express language only required Capacity to actually write a check to the Mother’s Trust (of which the four adult children were 25 percent beneficiaries) for $750,000. The remaining $1.05 million was given to Mom’s Trust in the form of a promissory note, which in turn divided that note into three equal promissory notes of $350,000, each of which was assigned back to the Company’s shareholders, the three sons.

Ultimately Mr. Zawideh’s client never had to repay (1) any of the money given to him by his father in the joint accounts, nor (2) the alleged $600,000 loan. Further, his company (1) reduced its liability on the promissory note, (2) provided for his mother’s needs for the rest of her life, and (3) avoided having to be liable for any tax on the forgiveness of the indebtedness had the note actually been terminated on Eva’s passing pursuant to the trust amendment.

No comments to show.